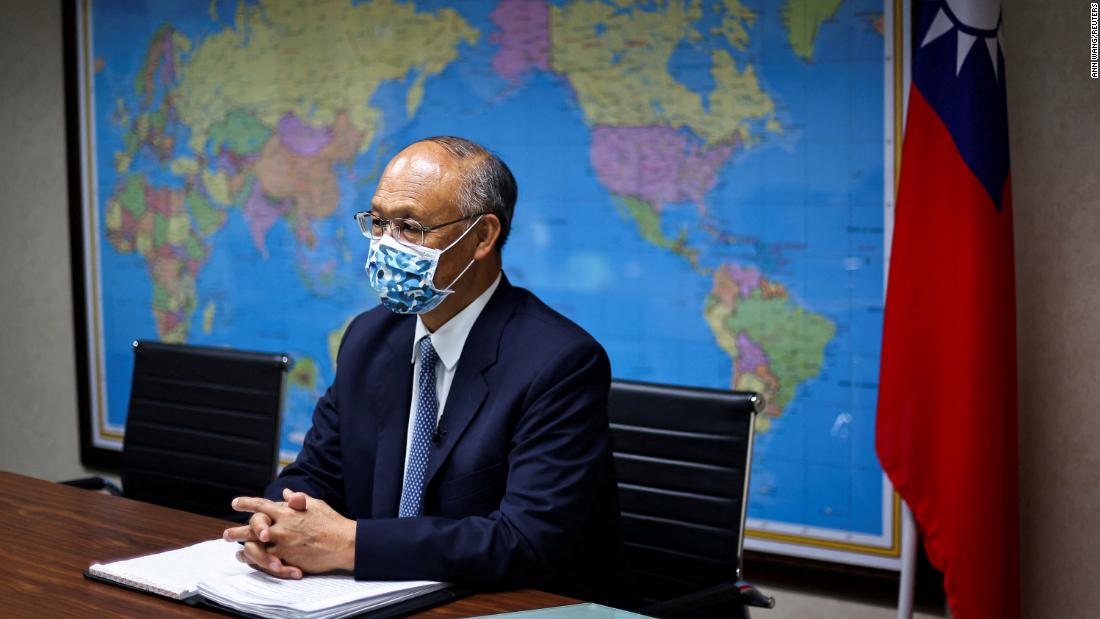 The two unveiled the US-Taiwan Initiative for 21st Century Trade in June, soon after US President Joe Biden excluded Taiwan from the Indo-Pacific Economic Framework (IPEF).

Everyone can see that China is engaging in economic coercion towards “Taiwan, not just the US but many other countries,” which is “harmful to the world economic order,” he said.

Officials in Beijing assert Taiwan’s full sovereignty, although Taiwan has never been controlled by China’s ruling Communist Party. The two sides have been ruled separately for more than seven decades.

China said Thursday that the “one-China principle” is a prerequisite for Taiwan’s participation in international economic cooperation and urged the United States to adhere to it.

Beijing “always opposes the negotiation of any economic and trade agreements with Taiwan that have a sovereign meaning and official character,” Foreign Affairs Ministry spokesman Wang Wenbin told a press conference.

Tensions between Beijing and Washington have risen significantly since US House Speaker Nancy Pelosi visited Taiwan earlier this month, the first by a sitting speaker in 25 years.

China began military exercises involving the navy, air force and other military forces in the seas and airspace around Taiwan. They were a direct show of force in response to Pelosi’s visit to the self-governing island, which Beijing has repeatedly warned against.

China, Taiwan’s largest trading partner, suspended some trade with Taiwan in retaliation for the visit. Halting imports of certain fruits and fish from Taiwan and exporting natural sand to the island, a key factor in the production of semiconductor chips.

In a phone press conference on Wednesday, a top United States diplomat said Pelosi’s recent visit to Taipei would be used as a pretext to “launch an intense pressure campaign against Taiwan and try to change the status quo.”

China “overreacted, and its actions continue to be provocative, destabilizing and unprecedented,” Assistant Secretary of State for East Asian and Pacific Affairs Daniel Krittenbrink said in the call, adding that its actions “could threaten peace and stability across the Straits.” vast area.”

An escalation of China’s military actions around Taiwan could disrupt global trade, analysts warn. The self-governing democratic island of 24 million people is a global leader in the supply of semiconductor chips, a key component for virtually all modern electronics.

“Taiwan is more important to the world economy than its 1% share of global GDP suggests,” Gareth Leather, senior economist at Capital Economics, said earlier this month.

“Further escalation in cross-border tensions that cut off Taiwan’s exports from the rest of the world will lead to new shortages in the automotive and electronics sectors and put further pressure on inflation,” he said.

The talks could “increase the opportunity for Taiwan to join international trade organizations such as the Comprehensive and Progressive Agreement for Trans-Pacific Partnership (CPTPP),” he said.

According to a separate statement from the Office of the US Trade Representative (USTR), Taipei and Washington DC will “seek to adopt provisions that encourage cooperation on ways to address these harmful non-market policies and practices.”

Deng said Taipei would suggest starting talks in September, though subject to the availability of US officials. USTR said the first round of negotiations is expected to take place this fall.

— Johnny Hallam contributed to this report.