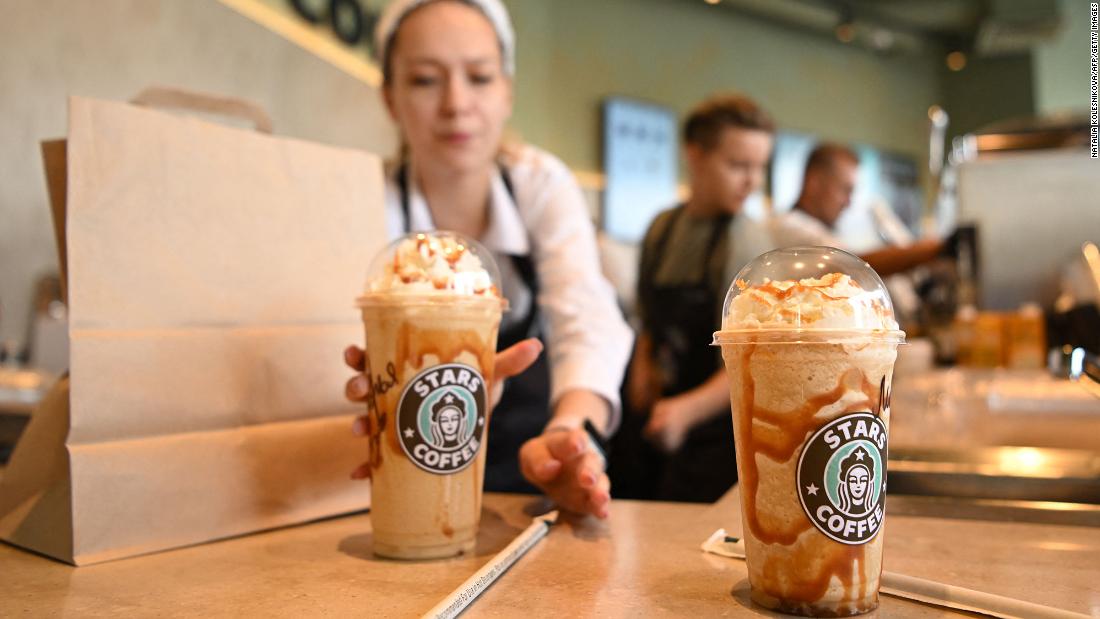 At a packed launch in central Moscow, rapper Timati presented the new brand, whose logo features an image of a woman with a star on her head, with co-owner and restaurateur Anton Pinsky before the stores opened on Friday.

Use is prohibited Starbucks (SBUX) In the logo, Timati tried to find some continuity, namely the circular shape and “femininity,” which he said contrasted well with the brown, cigar-like “masculine color” of the new logo.

“People’s perceptions can be different,” Pinsky said. “But if you compare, except for the zone, you usually don’t see anything.”

Starbucks declined to comment on the logo and name similarity, but cited an earlier statement saying the company had made the decision to exit and no longer had a brand presence in the Russian market.

Timati said that since Starbucks had its own resources and production base, the two had to find new suppliers, but they did not face any problems.

Stars Coffee imports beans from Latin America and Africa, Pinsky said, along with other suppliers based in Russia.

“We found other suppliers, found the right roasters, and because the baristas mixed everything right, we had a product that we thought was competitive,” he said.

Seattle-based Starbucks, which helped popularize takeaway coffee in a traditionally tea-loving society, said it will exit Russia at the end of May after nearly 15 years.

Starbucks has 130 stores in Russia, operated by its licensee Alshaya Group, with about 2,000 employees in the country. Pinsky said stores will gradually reopen in August and September.

Timati told Reuters that Alshaya, a global franchise operator based in Kuwait, had lost interest in doing business after Starbucks withdrew its brand from Russia. Alshaya did not immediately respond to a request for comment.

“We won the tender – there were a lot of participants – took it over and made it our own brand,” he said.

The deal reflects a wider trend among Western brands, which are changing the country’s retail and corporate landscapes as the conflict in Ukraine enters its sixth month.

Renault sold its majority stake in carmaker Avtovaz to a Russian player for just one ruble, while McDonald’s, whose restaurants have now become Vkusno & tochka, did not disclose the figure.

Both of those deals included buyback options, but Pinsky said that did not apply to Starbucks because of the franchise model it operates in Russia.

He declined to disclose figures related to the deal with Alshaya. “We invested as much as we paid them,” Pinsky said. “It is (an) expensive pleasure.”

The pair said they were interested in more acquisitions, but did not provide further details.

Although the partnership may seem unlikely, Timati, one of Russia’s most famous rappers, co-founded the Black Star Burger chain, which sells the “Timiati Burger” in Russia.

He is known for his support of the Kremlin and in 2015 released a track with the lyrics “President Putin is my best friend”.

Pinsky, who told Russian reporter and political activist Ksenia Sobchak earlier this month that he had never tried coffee in his life, has a string of restaurants in his portfolio, including Timati, a joint venture with Redbox, serving pan-Asian cuisine.