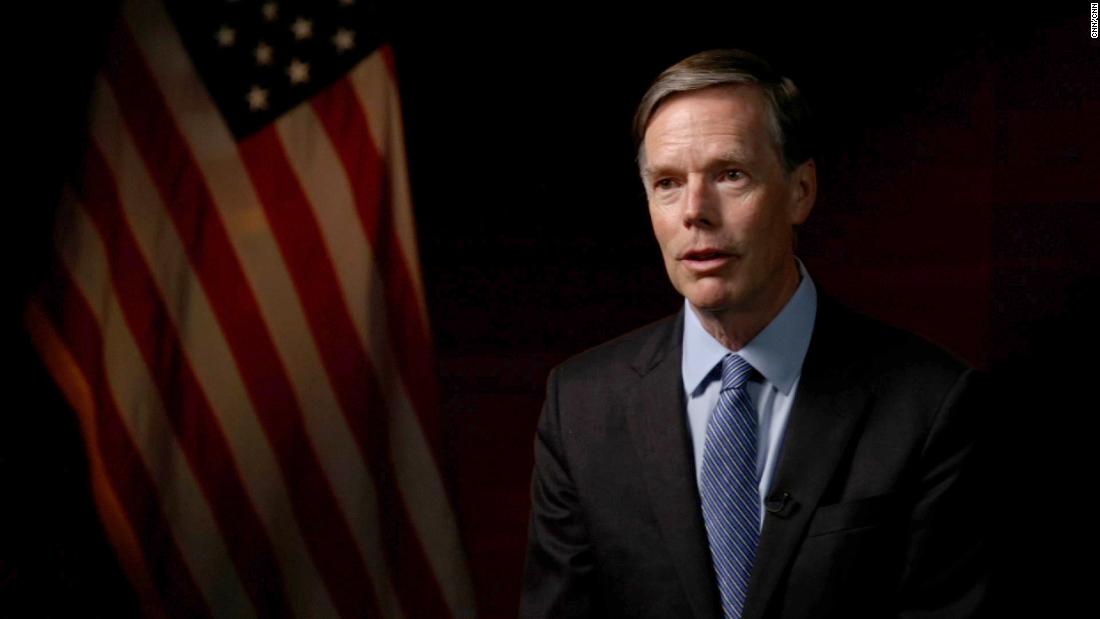 “We don’t believe the visit of the Speaker of the House of Representatives to Taiwan — a peaceful visit — should be a crisis in US-China relations … It’s a manufactured crisis by the government in Beijing. It’s an overreaction,” Burns told CNN from the US Embassy on Friday.

It is now “the responsibility of the government in Beijing to convince the rest of the world that it will act peacefully in the future,” the ambassador said.

“I think there’s a lot of concern around the world that China has now become an agent of destabilization in the Taiwan Strait, and that’s not in anyone’s interest.”

Burns, a career diplomat and U.S. ambassador to NATO, arrived in Beijing in March to take on the U.S.’s most important diplomatic posting — navigating already strained U.S.-China relations on a range of issues, including China’s human rights record, trade practices and military expansion in the South China Sea.

China’s strict Covid-19 restrictions have reduced diplomatic travel in and out of China, putting Burns even more squarely at the forefront of managing the increasingly contentious relationship between the world’s two largest economies.

That was evident on the night of August 2, when Burns received a summons to a meeting with Chinese Vice Foreign Minister Xi Feng, who described the exact moment the plane carrying Pelosi and her congressional delegation landed in Taipei.

“We had a very lively meeting, I would say quite a contentious meeting,” Burns said, detailing the discussion for the first time, which both Washington and Beijing confirmed at the time.

Instead, Burns said, Beijing has engineered its response, including sending missiles over Taiwan to “intimidate and coerce Taiwanese officials” and “wage a global campaign” blaming the US for undermining stability in the Taiwan Strait.

“We are very clear (about maintaining our policy). The issue is — does a government react aggressively and violently to disturb the peace? That should concern everyone in the world,” he said. .

The US upholds the “One China” policy, but has never acknowledged China’s ruling Communist Party’s claim to sovereignty over Taiwan. Washington maintains “strategic ambiguity” over whether it would come to Taiwan’s defense in the event of a Chinese attack.

The Communist Party has vowed to “reunify” the island, which it has never controlled, with mainland China by force if necessary.

China denounced Pelosi’s visit as a violation of its “sovereignty and territorial integrity,” while Burns’ counterpart, Chinese Ambassador to the U.S. Qin Gang, said earlier this month that the U.S. should “bear responsibility” for the situation it created.

Those moves and Pelosi’s visit came on the heels of a phone call between Chinese leader Xi Jinping and U.S. President Joe Biden in late July, in which both sides said their teams would stay in touch about cooperation — according to WHITE HOUSE — In a possible face-to-face meeting. While the two have not met in person during Biden’s presidency, Xi conducts much of his Covid-era diplomacy via video link.

Beijing’s diplomatic moves in the wake of Pelosi’s visit could have global implications, Burns said, adding that China’s freeze on climate talks would affect the global South and countries most vulnerable to climate change.

“We strongly urge (China) to return to the negotiating table with the United States on climate,” Burns said.

Asked if any lessons Beijing learned from observing Russia’s aggression against Ukraine could be applied to Taiwan, Burns said the U.S. is “watching China very carefully as it conducts its relationship with Russia.”

China has refused to condemn or mention the invasion.

“We have made it clear that there will be consequences if there is systematic Chinese government support for Russia’s brutal war in Ukraine,” he said, adding that he had not seen such support.

Burns has fielded sensitive briefs before. He was a key official in negotiating thorny issues such as Iran’s nuclear program, military aid to Israel, and the US-India civilian nuclear deal. And this time, he says, the US China mission is trying to “connect” with its counterparts.

Another “major ambition” is to connect with the Chinese public, said the ambassador, who has traveled to China many times since his first trip in 1988, including a visit to the United Kingdom’s 1997 handover of Hong Kong to China.

But Burns said his work connecting with the Chinese people in person and through the embassy’s social media channels has been challenged by China’s zero-covid containment measures — which make domestic travel and in-person meetings difficult — and the embassy’s censorship of posts on its regular Chinese social media platforms.

Burns said the embassy’s social media posts, including support for US China policy, Hong Kong, NATO and LGBTQI pride, have been censored as “devastating censorship” by Chinese officials.

At the same time, Burns said he was “disturbed” by Chinese government narratives that blame the war in Ukraine on the United States and NATO, and not Russia, for launching the invasion — an issue he said he has raised with his Chinese counterparts. .

Despite these challenges and the US pledge to “compete responsibly” with China, Burns called on China to meet the US “halfway” to discuss their differences and issues where they can work together for the greater good: “You have to show up at the negotiating table to cooperate,” he said.