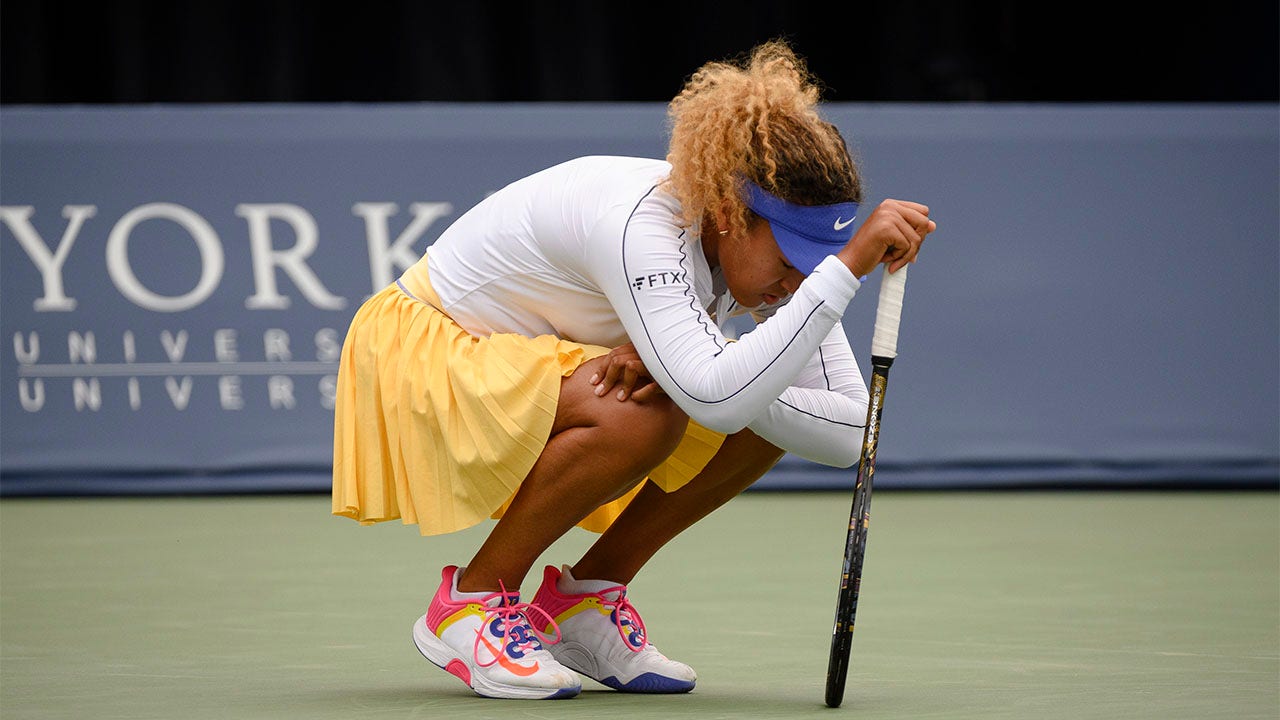 Naomi Osaka’s recent struggles continued with an early exit at the National Bank Open on Tuesday.

The four-time Grand Slam champion retired from his first round match with a back injury. She was trailing 7-6 (4), 3-0 against Estonia’s Kaia Kanepi when she withdrew from the competition.

“I felt my back from the start of the match, and even though I tried to push through it, I couldn’t today,” Osaka said. “I want to give credit to Kaia for playing well and wish her the best for the rest of the tournament.”

Entering the tournament, Osaka had been eliminated in the first or second round of her last three contests, including a straight-sets loss to Coco Gauff at last week’s Mubadala Silicon Valley Classic. It was his first tournament since the French Open after recovering from an Achilles injury.

Naomi Osaka rests during her match against Kaia Kanepi of Estonia during the National Bank Open tennis tournament, Tuesday, Aug. 9, 2022, in Toronto.
(The Canadian Press via Christopher Katsarov/AP)

Before that run, he had his best tournament of the year, before losing to top seed Iga Sviatek in the final of the Miami Open in early April.

The 31st-ranked Kanepi will play Spain’s 8th-ranked Garbine Muguruza in the next round.

Naomi Osaka is favored by a coach during her match against Kaia Kanepi of Estonia at the National Bank Open tennis tournament, Tuesday, Aug. 9, 2022, in Toronto.
(The Canadian Press via Christopher Katsarov/AP)

Osaka struggled with unforced errors and had four of her five double faults in the first set. He won the first game with the help of three unforced errors from Kanepi, but the four-time Grand Slam champion lost his momentum at 2-1.

Kanepi won four of the next seven games to take a 5-3 lead. From there, Osaka had to fight back from two set-point opportunities from Kanepi. With a mix of a strong backhand and multiple errors from Kanepi, Osaka was able to tie it up and send the set to a tiebreaker.

With the tiebreaker tied at 3-3, Kanepi raised her game by taking four of the next five points, handing Osaka her set point on a shot past the baseline. Kanepi built on that momentum in the second set, taking advantage of Osaka’s mishap and firing sharp forehands past the Japanese star.

After hitting her second ace of the match earlier in the final game, Kanepi closed with a strong serve and Osaka returned high and wide.

Naomi Osaka reacts during her match against Kaia Kanepi of Estonia during the National Bank Open tennis tournament, Tuesday, Aug. 9, 2022, in Toronto.
(The Canadian Press via Christopher Katsarov/AP)

Andreescu won the event before claiming the US Open title in 2019, which was a fantastic year for the 22-year-old. She has not won a tournament since battling injuries and taking a “mental break” at one point in 2021. Andreescu’s only final appearance this year fell to Caroline Garcia at the Bad Homburg Open.

Andreescu will play France’s Alize Cornet in the second round.