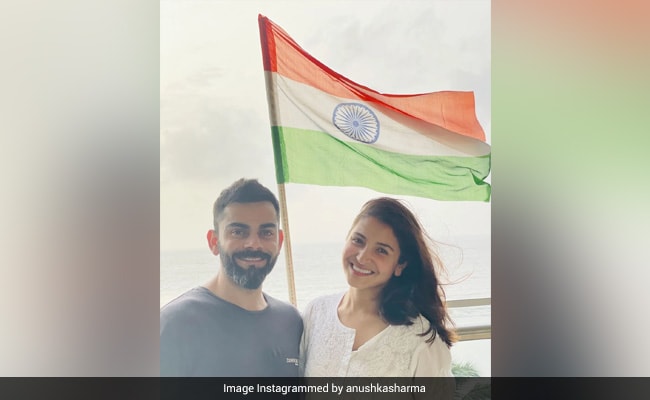 Anushka Sharma and Virat Kohli with Prime Minister Narendra ModiHar ghar tirangaCampaign to celebrate India’s 75th Independence Day. The 34-year-old actress shared a picture with Virat alongside an Indian flag flying at her home on Monday. In a white kurta, Anushka is smiling as she stands next to Virat in the picture. “Celebrating 75 years of our independence. Happy Independence Day to all Indians around the world! Jai Hind,” Anushka wrote in the caption. On the other hand, Virat Kohli has changed his Instagram display picture to tricolor.

Other celebrities joining the campaign are Shah Rukh Khan, Ajay Devgn, Salman Khan, Kartik Aryan and Aamir Khan. Shahrukh posted a video with his family hoisting the flag at their home Mannat. He wrote: “It takes a few more sittings to teach the youth at home the essence and sacrifice of our freedom fighters for our India. But the flag hoisting by the little ones made us all feel proud, loved and happy. Instantly.”

Meanwhile, Anushka Sharma is training for her upcoming film Chakda Express. Directed by Prosit Roy, the film is a biopic on cricketer Jhulan Goswami, one of the greatest female fast bowlers of all time. The film shows the journey of Jhulan Goswami in the field of cricket and the problems he faced.

Anushka was last seen in Anand L Rai’s film zero 2018 co-starring Shah Rukh Khan and Katrina Kaif. The actress, however, was busy as a producer for such projects. Underworld And Bulbul.