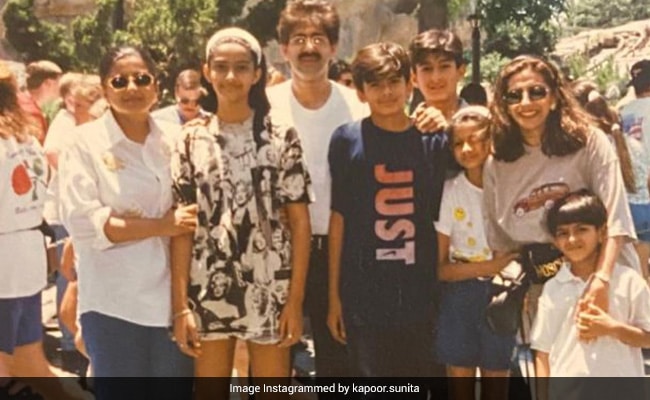 This picture was shared by Sunita Kapoor. (Courtesy: kapoor.sunita)

Anil Kapoor’s wife Sunita Kapoor took a trip down memory lane and wished sister-in-law Reena Marwah (Anil Kapoor’s sister) on her birthday. She has shared several pictures on her Instagram handle, but the one that caught our attention is the last photo showing the childhood days of Sonam Kapoor, Rhea, Harsh Vardhan, Mohit and Akshay Marwah. In the picture, Sunita and her family – daughters Sonam and Rhea and son Harsh Vardhan pose with the Marwa family – Reena, Sandeep and their sons Mohit and Akshay. Sharing the post, Sunita Kapoor wrote, “Happy birthday to the best sister-in-law. Many more years of unbridled laughter, holidays and bonding. Love you so much.”

Sonam Kapoor shared throwback pictures on her Instagram, wishing Bua on her birthday. In the films, she will be seen with Arjun Kapoor, Akshay Marwah and Rhea Kapoor. In the caption, he wrote, “Happy Birthday Bua.. Love you.”

Sanjay Kapoor shared a video on his Instagram featuring pictures of the Kapoor family’s festive celebration and dinner outing. He captioned it, “Happy Birthday and Happy Rakhi to my beautiful sister.”