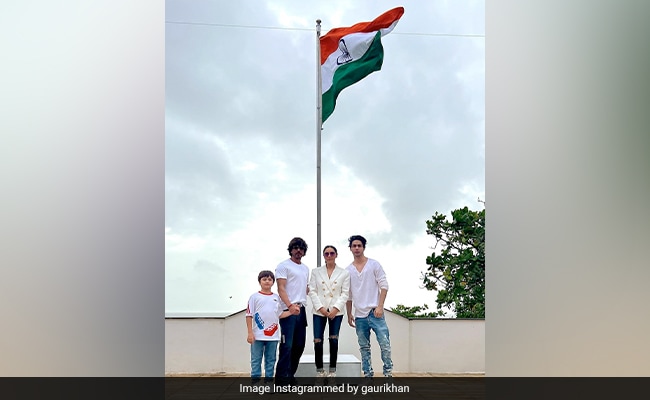 Shah Rukh Khan hoisted the tricolor at his Mumbai bungalow Mannat on Sunday. The actor along with his family – wife Gauri Khan and sons Aryan and AbRam – joined Prime Minister Narendra Modi’s.Har ghar tirangaCampaign to celebrate India’s 75th Independence Day. Sharing a video of him and his family hoisting the flag, SRK wrote: “It takes a few more sittings to teach the youth at home the essence and sacrifice of our freedom fighters for our India. But getting to hoist the flag made the little one feel instant pride, love and joy in all of us.”

Gauri Khan, an interior designer, shared a family picture of Shahrukh Khan, Aryan and AbRam standing in front of a flag. But the couple’s daughter Suhana Khan was missing from the film. In the caption, Gauri wrote: “Happy Independence Day.”

Check out SRK and Gauri’s posts below:

On the work front, Shahrukh Khan will star in Siddharth Anand’s film Pathan Deepika Padukone and John Abraham also star. The film is set to release in January 2023 and SRK is all set to return to the big screen after Anand L Rai. zeroIn it he starred alongside Katrina Kaif and Anushka Sharma.

SRK will also be seen JawanFilms directed by Attlee Bigil And Mersal Hit in the Tamil film industry. Nayanthara is also in the main cast.

Besides, the 56-year-old actor will also be seen in Rajkumar Hirani’s film Dunky With Taapsee Pannu.