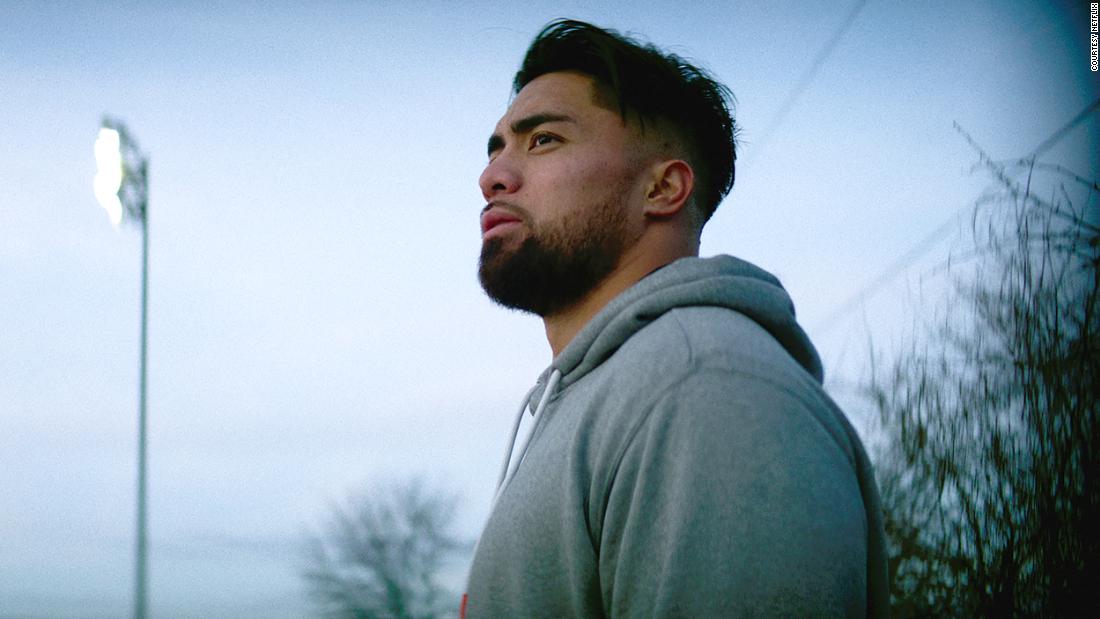 In high school, Te’o was an all-around star — beloved by those around him and on track for a full football scholarship at the University of Notre Dame. He was the golden boy in his Hawaiian hometown, active in his faith and easy-going.

Then tragedy struck. His grandmother died, then his girlfriend. Both are same day.

Te’o, Tuiasosopo and the elaborate 2013 hoax are the subject of a new two-part documentary, “Untold: The Girlfriend Who Didn’t Exist,” directed by Ryan Duffy and Tony Wainuku, out Tuesday on Netflix.

The story of Te’o and his fake girlfriend is well-known, but the story of Tuyasosopo — who created the imaginary girlfriend as a way to contain his own gender dysphoria — is less so. Tuyasosopo has since come out as a transgender woman.

Although the audience may recognize Te’o’s name first, the documentary opens with Tuiasosopo. She plays a lead role in two episodes, bringing the audience along on her journey of self-discovery and gender identity — shaped in part by her catfishing experiences with Te’o.

CNN spoke with McLane Way, who created the “Untold” series with Brother Chapman, about how the team approached Tuyasosopo and Teo’s journeys to portray them as both synchronous and separate.

This conversation has been edited for length and clarity.

What made you decide to specifically focus on Manti Teo and Naya’s story?

We will be able to do more “untolds” and when we get the news that we have volume two, this is the story on the whiteboard of our literal and proverbial sports ideas. It has always been a white whale in the sports documentary space; It was my brother and I remember very well, reading the news media in it and all the commotion.

We caught up with Naya and had a fascinating conversation with her. Maybe it was just a 15, 20 minute call, and we talked to her for two hours. And she took us through just such a remarkable journey, a journey of self-discovery and self-identity and how she identifies as a trans woman.

And then in terms of reaching Manti and talking to him, I think a lot of people have approached him to talk about this story over the years. I think there’s been a pile of documentary pitches sitting in his inbox over the years.

I think we caught Manti at a really interesting time in her life. His NFL career is coming to an end – I doubt this is a story he would have commented on or done a really long in-depth interview while still active in the NFL. But they just got married and had a baby and I think both Naya and Manti were not happy enough with how the media was covering this saga in 2013. The end period of this long sentence which is a story between these two people. So I think the opportunity to interview both of them at length, in depth, about this story was fascinating and appealing to them. And for us as filmmakers, we really knew, “Okay, we’ve got something special here. I think we can go make this documentary.”

One thing that stands out to me is that this is obviously a story about Manti, but you choose to lead with Naya and say that you actually talked to her first. But many people might expect the episodes to be more football-centric. Why did you make that choice to lead with her and keep her story at the forefront?

As filmmakers, we had more questions. Naya Dr. Phil appeared on the show and was involved with light media appearances but didn’t really go deep into the record and tell the whole story.

(Naya) So open, so vulnerable, she told her story warts and all. Why she decided to occupy this space, why create this online identity profile, DM and text a football player like Manti Te’o, build relationships, make phone calls — all of that was really fascinating to us. And I think that’s really the basis of why we’re interested in talking to her.

I am a sports fan but I definitely felt that part of her story attracted me.

Yes, and I think we don’t have enough of a mandate, or we really don’t like to shoehorn these stories into specific thematic bridges between all of our “untold” documentaries. But I think in a way, any of our documentaries, even if they’re sports documentaries, really have nothing to do with who’s going to win the championship game, who’s going to hit the three-pointer and the clock is winding down and winning. game for his team. Actually, we talk about these stories because they are interesting things that happen off the field or off-ice or off-court. That really tells the story we like to tell in the vein of making these sports documentaries.

For this, a mega-big catfishing scam like this one from 2013, it seems just ripe. Yeah, it’s a sports story, a football story to a degree, but really it’s a story about two guys who were pretty young at the time — I think they were 19-, 20-years-old when they were building this relationship — and so we’re two guys who really knew what those conversations were about, Knew how their relationship was, knew how each other felt about each other. And so for us, it’s a really strong need that we both talk about this because I think that’s the only way you can tell a story like this.

Naya’s transition journey is a big part of this documentary, and I know you included a disclaimer when referring to Naya that Manti and some of the interviewees didn’t know Naya was trans. You also showed some old photos and footage from before she transitioned. I know sometimes those things can be sensitive for a lot of people. In the two episodes, how did you decide to navigate that, especially for an audience unfamiliar with transgender identity and LGBTQ+ issues?

As these documentaries are their own art forms they take a long time and I think it took us two years to make a two-part documentary. When we first spoke to Naya, she spoke about her journey of self-discovery and self-identity as a process of evolution.

She now, and we encourage this, identifies as a proud trans woman. But by the time we were shooting this documentary, his journey had evolved to a point. So in discussions with her and our team and people who are deeply rooted in LGBTQ issues, we basically realized that it’s not our place as filmmakers to tell others about the complex journey she’s been on. If this documentary was starting today, considering where Naya is, I think we’d probably be at a different point, but at the time… Naya didn’t recognize that much.

Did anything surprise you while you were all involved in the research and reporting process? Did something stick out that you didn’t expect?

We definitely thought of Naya and Manti as our main storytellers, but obviously when you introduce other people and other people have their own perspectives or their own experiences with the story, we found the investigation by Tim Burke and Jack Dickey at Deadspin. Very interesting in the story. Obviously he was the one who received the anonymous tip and was the first to hit the ground running to break and publish the story, but it’s fascinating to learn behind the scenes about how he works as an investigative journalist.

I think it all starts and stops where you get your main storytellers, and then you start thinking about who you can have interesting voices for. We always thought Deadspin guys could have interesting voices to a degree. Perhaps no one would know about this story if they hadn’t chosen to follow up on an anonymous tip they had. So they seemed to have a direct influence on the story, a direct influence on some of the plot points in the story and how the story unfolded.

There’s this idea in the episodes, you could call it lineage, where both Manti and Naya are focusing on being an inspiration to the people who come after them, especially in the second episode. Was that something you all thought about when putting these episodes together?

I think it’s something real and important the way they talk about it. For both Naya and Manti, we did several multi-day interviews, long day interviews, two to three days with each. And in that process, it’s a unique way to talk to people and hear their stories, but I think you definitely pick up on what’s so important to them and what they feel on a deep, truly human level. And I think they spoke from the heart when they talked about what this and that meant to both of them. So for us as artists and filmmakers, when you get those interview answers from your subjects it’s really like a guiding light and a star that encourages you to put them in your documentary. I think it’s very genuine from them.